Drones are taking the world by storm.  They are being used for filming, inspection, agriculture, and more—all around the world. It seems that someone is coming up with a new use for drones on a daily basis.

One place you may not have expected to see drones find a niche is in fishing. Yet, drones are starting to become an essential part of many fishermen’s equipment.

So, let’s look at how drone technology is being used in the world of fishing and how, perhaps, you can add a drone to your arsenal to really up your game.

Before we get to the actual use of drones in fishing, we need to talk about what the word “drone” actually means. The problem is that there’s a popular usage of the word “drone” which doesn’t quite account for the technical truth about these machines.

In truth, the word “drone” refers to an uncrewed aerial vehicle (UAV)—which would encompass all remote-controlled craft whether flying in the air, rolling on the ground, or moving through water. Yet, people don’t call RC helicopters, boats, and cars “drones”.

This can make it all pretty confusing, but for the sake of this article the word “drone” generally refers to a remote-control craft that has some form of autonomy. That is, it can control itself to one degree or another.

Not every fishing drone is going to conform to even that one criterion, but once you understand what these machines look like and do in practice, you’ll understand the distinction.

How Drone Fishing Works in General

The first thing you need to understand is that, in general, “drone fishing” doesn’t mean you’re actually catching fish with a drone. The primary role that drones play here is as a means of transporting the line out, far onto the water.

In the past, you’d have to get into a kayak or some other small boat and take the line out onto the open water where the fish you’re trying to get are located. With a drone, you can quickly fly the line out to the middle of a body of water, drop it, and then fly it back.

These days most good drones have 30 minutes of flight time on a single charge and can move at quite a clip, so this sort of task shouldn’t be hard at all.

So, since people are using general-purpose drones, how exactly do they attach and release the line? Right now, there aren’t many official solutions, though I expect that to change if drone fishing stays popular.

Drone fishermen use a rig with a release clip that will release the line when more than a certain amount of resistance is encountered. This is usually attached to a landing strut or some other sturdy attachment point on the drone so it won’t get tangled in the rotors or otherwise interfere with flight.

The downrigger release clip should hang quite a bit below the center of the drone. Obviously, you should not attach it to critical or fragile components such as the camera gimbal.

To get the line where you want it, let your reel turn freely and fly the drone out to the right spot. Then lock your reel and keep the drone flying away until there’s enough tension to trigger the release mechanism. The drone should now be free and clear to fly back to shore, while your bait is dropped right in the sweet spot.

The fishing gear doesn’t really matter. It works with an affordable rod, a basic reel, and pretty much anything you already have.

Legal Implications of Drone Use

Consumer drones are still pretty new technology, which means that laws and regulations have been slow to adapt. That being said, most nations now have some form of legal framework describing when and how you are allowed to use a drone.

The work done by the Federal Aviation Authority in the USA has paved the way for other nations as well, and you’ll find that drone laws in your own country are often similar to the FAA rules. However, it is YOUR responsibility to make sure you are familiar with local laws before you take to the skies.

In general, any drone big enough to carry a line will have to be registered with the local aviation authority. If you’re making a living as a fisherman, you may also have to comply with additional requirements for commercial drone use, which may include writing a license test.

You also need to keep in mind that there will be strict no-fly zones. Government installations, airports, power infrastructure, and other sensitive areas will usually have a buffer zone around them where no one may fly without expressed permission.

Also, be mindful of other people, whether on land or on the water. In general, it’s not permissible to fly drones over people, and especially not one trailing a fishing line. Chances are that your local authorities have yet to catch on to drone fishing in particular, but be sure to check if there are special laws that ban or regulate it.

Things to Consider When Choosing a Drone

So, which drone should you use to go fishing with? In principle, any drone that can lift the line and release the clip will do, but that’s not very helpful.

If you aren’t bothered by things like video quality or the other factors that make the DJI drones cost as much as they do, then go for a less expensive clone.

If you do care about the camera and want to see a live picture from shore, it’s better to stick with the drones that are geared toward video and photo enthusiasts, so you can get a useful image on your screen.

Another practical consideration includes the sort of weather conditions the drone can fly in. Of course, no consumer drone will fly in inclement weather, but some can handle stronger winds than others. This matters when you want to fish in places that often have windier conditions.

The drone must be fast enough and strong enough to get where you need it to go. It also needs to have enough flight endurance to make multiple trips. A drone with an easily removable battery is also useful, so that you can keep several charged batteries with you to get you through an entire fishing session.

Finding Fish – the Alternative Role for Drones in Fishing

While carrying a line out to the optimal fishing spot is the obvious use for drones when it comes to fishing, there are other things they can be useful for as well.

As you can see in the video above, you can use a camera drone with a live video feed to scout good spots. You may actually be able to see fish from above, and, unlike a boat, the fishing drone should not cause any disturbance to them.

As you recall from above, a drone is any unmanned vehicle, not just those that fly. So, you shouldn’t be surprised to know that you can now buy small drone submarines and explore the underwater world without having to get your own feet wet.

These drones are either tethered with a long cord or they use a floating relay (for the more expensive versions). Since radio waves don’t propagate well through the water, this is what we’re stuck with for directly controlling these subs. However, with modern computer technology your drones can, to some extent, think for themselves with somewhat limited autonomy.

So, what use are these drones to someone who wants to use them for fishing?

Let’s take the pioneering PowerRay. This drone has a sonar system to locate fish, and a bait dropper is included with the special fishing version of the product. That’s in addition to a 4 K camera that’s part of the base model. It can be equipped with a 70 m cable and it can dive as deep as 30 m. Just in case you’re interested in the drone fishing version of the PowerRay, it’s called the “Angler”.

The downside is that, for now, these drones are pretty darn expensive. Flying drones are pricey in their own right, but the prices have come down dramatically. Submersible drones aren’t likely to ever reach the same mass appeal, but if you’re really serious about your fishing, this could become your most effective piece of kit.

Is Drone Fishing for You?

Drone fishing is an incredibly interesting development in the sport, but it’s not without its controversy.

There are, of course, purists who want nothing but a rod and the open water between them and the next catch. Then again, an argument can be made that using a rod and reel is already much less pure than, well, catching fish with your bare hands or using a throwing spear.

The truth is that humans are tool users, and a fishing drone isn’t a substitute for any of the skill you need to land a fish. Instead, it’s a way to gain more information and place your line more efficiently so you can spend more time fishing and less time messing around.

That being said, there are still plenty of fishing types and environments where drones are not yet useful. First, make sure you can use a drone for the type of fishing you do, and then determine if the cost is worth the reward. 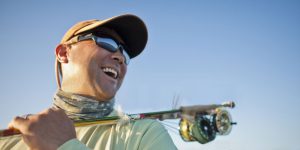 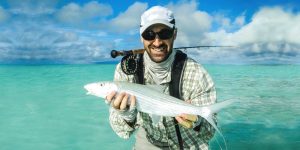 10 Tips for Catching Bonefish on the Fly

Bonefish are a bucketlist fish for anglers from all over the globe, but what is it that's made them so …

END_OF_DOCUMENT_TOKEN_TO_BE_REPLACED

If fishing has you hooked, you know that polarized sunglasses are the only way to go. It's truly amazing …

END_OF_DOCUMENT_TOKEN_TO_BE_REPLACED

Drones are taking the world by storm.  They are being used for filming, inspection, agriculture, and …