Even if you’re the strongest swimmer in the world, there’s always the chance that something will go wrong. This is why a personal flotation device (PFD) is a non-negotiable part of every person who wants to explore wild and open waters.

Choosing a PFD can be confusing, though. There’s a fair variety of products designed for different purposes and needs. So I’m going to help clear that up.

A PFD is really any device that stops you from sinking, which means that life jackets (also known as life vests) are a form of PFD.

However, they are only one type of PFD and are distinct in the way they work. Life jackets are designed so that an unconscious or otherwise incapacitated person will still float right way up with their faces out of the water.

This makes them perfect as a safety device for people who are not necessarily strong swimmers or trained to survive in the water if something goes wrong. Life jackets are pretty restrictive, making it hard to swim or maneuver yourself. They are meant to keep you afloat and alive until help arrives as a top priority.

PFDs that are not life jackets can help keep you afloat, but you need to be competent and in control. These flotation devices are usually designed for specific water activities and let the user move freely in a way that lets them take part in that activity.

So snorkelers, lifeguards, surfers, and the like have special PFDs that will keep them afloat, without the expectation that they’ll be unconscious or unable to swim.

The names of these two broad categories of PFD should be self-explanatory, but let’s go over it anyway. Inherently buoyant PFDs contain materials that are less dense than water and will therefore always float in water.

There are quite a few advantages to a PDF that’s inherently buoyant. The obvious one is that the PFD is ready to go at all times. You don’t have to do anything special. You also don’t have to worry about maintenance, as it doesn’t matter if this type of PFD is punctured or a little damaged. It will still keep you afloat.

These PFDs can be used for a wide variety of water activities and they often have nice extra features such as pockets for emergency rations or a flashlight.

Inflatable PFDs have to be inflated using a gas such as CO2. Manually inflatable PFDs usually have some sort of pull cord that releases the gas from a CO2 canister, which then inflates the PFD. Automatic PFDs detect when you fall into the water and inflate by themselves – a better choice if you are doing something that might knock you out.

Inflatable PFDs are much more compact than inherently buoyant ones, but they also need way more maintenance. Moreover, you need to replace the CO2 cartridge after each inflation.

You also need to check it for punctures. That’s why these types of PFD aren’t recommended for action water activities such as whitewater rafting or waterskiing, since you could hit the water or the bottom hard enough to incapacitate you.

The third option is a hybrid design, which is partly inherently buoyant and partly inflatable. This gives you more mobility and some built-in safety. These are the most expensive options and are only really good for some specific use cases that require both of these aspects to be present.

The US Coast Guard has come up with some pretty useful classifications for PFDs that have now been widely adopted. They are, however, working on revising these at the time of writing, so by the time you read these things may have changed a bit.

It doesn’t matter if a PFD is inherently buoyant, inflatable, or hybrid. If they are in the same category here they will work for the same general purpose.

Here are the four types of recreational PFDs:

Type I PFDs are designed for use in the open waters, away from shore. This includes rough seas, the middle of large lakes, or anywhere people may need to be kept alive for long periods of time before rescue teams can get to them.

Type II PFDs are for near-shore use. These are generally best for boating on calm waters near shore. They offer a good balance between bulk, comfort, and safety.

Type III PFDs are still suitable for the same sort of general use as Type IIs, but are also marked with specific specialized use. For example, it might be designated for kayaking, waterskiing, or fishing.

Type V PFDs are only to be used for the specific activity they are marked for. You should not use them for any activity or purpose not explicitly stated in the documentation.

Only Type I PFDs are rated for commercial use, so if you need a PFD and are doing it in a commercial setting, this is the type to go for. If you’re wondering where Type IV PFDs are, well these are PFDs that are thrown to people who have fallen into the water. In other words, life preservers.

Sizing is of utmost importance when it comes to PFDs. You need to make sure that the PFD in question will actually help a person of a given size float. It also mustn’t be too large.

Children and adults who fall outside of the adjustment range of standard PFDs should purchase units that fit them properly. No person should brave the water without a PFD that fits them correctly.

PFDs, especially life vests, can come with a number of extra features which may appeal to you depending on the use case in question.

The most basic is probably the humble pocket. What you choose to put in those pockets is up to you. Maybe you want a ration or shark repellant. The point is a pocket makes it possible to pack some lifesaving gear.

Tabs are also useful, since you can attach knives, flashlights, whistles, emergency strobe lights, and more to them. Reflective tape strips also make it easier to spot in the water, an important consideration if you’re ever going to be on the water at night. Finally, ventilation features are important when it comes to inherently buoyant PFDs, since they tend to get hot and bothersome. 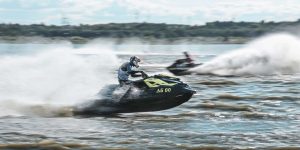 Everything You Need to Know About Jet Skis

The Wonderful World of Personal Submarines 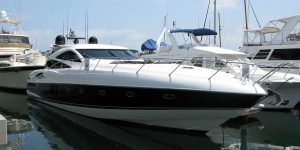 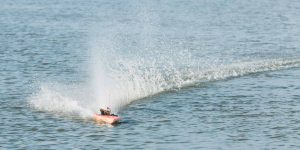 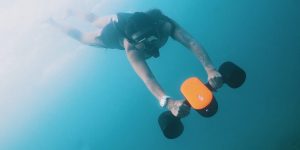 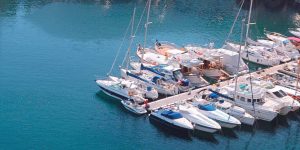 END_OF_DOCUMENT_TOKEN_TO_BE_REPLACED

Some of you, especially divers, may recall the tragedy in late 2019 with the dive boat Conception …

END_OF_DOCUMENT_TOKEN_TO_BE_REPLACED

Water is quite possibly the most important substance on planet Earth. Without it, life could not exist. …

END_OF_DOCUMENT_TOKEN_TO_BE_REPLACED

Recent in Other Water Fun

END_OF_DOCUMENT_TOKEN_TO_BE_REPLACED

Jet Skis are often their own best advertising. Who can look at someone scooting around on the waters, …

END_OF_DOCUMENT_TOKEN_TO_BE_REPLACED

While everyone is going on about flying RC drones, those of us who enjoy the wetter things in life spend …